“A different kind of comparison for me.

Over the past 8 months we have seen a beautiful babe begin to discover her strength!

Bek came to us here at Barbell Babes already training in a commercial space. She was training, going into the gym and lifting weights. She was stuck in a rut, unsure of where and how to move forward.

Bek came to us wanting to make changes to her body composition and knew that strength training was where she needed to focus her efforts. She was unsure if what she was doing was right for her and if it was going to help her achieve her goals.

Bek came to us with an eager mind to learn and grow. This attitude was something that we nurtured and enhanced over the past 8 months to allow her to flourish with a barbell.

Since January the exciting journey that has begun to unfold has allowed Bek to lose 12.5kg (we did her measurements last Wednesday!) but what she has gained over this time has been truly inspiring.

She has uncovered a deep love of lifting heavy and will be competing in her first Powerlifting Competition early next year.

She has grown in confidence which enabled her to make a huge decision and chase career progression, landing a new job with many new opportunities.

She bought a house!

She has learned how to nourish her body to satisfy her physical and emotional hunger.

We love sharing the achievements of our incredible community. Our ladies achieve some incredible goals and so can you! 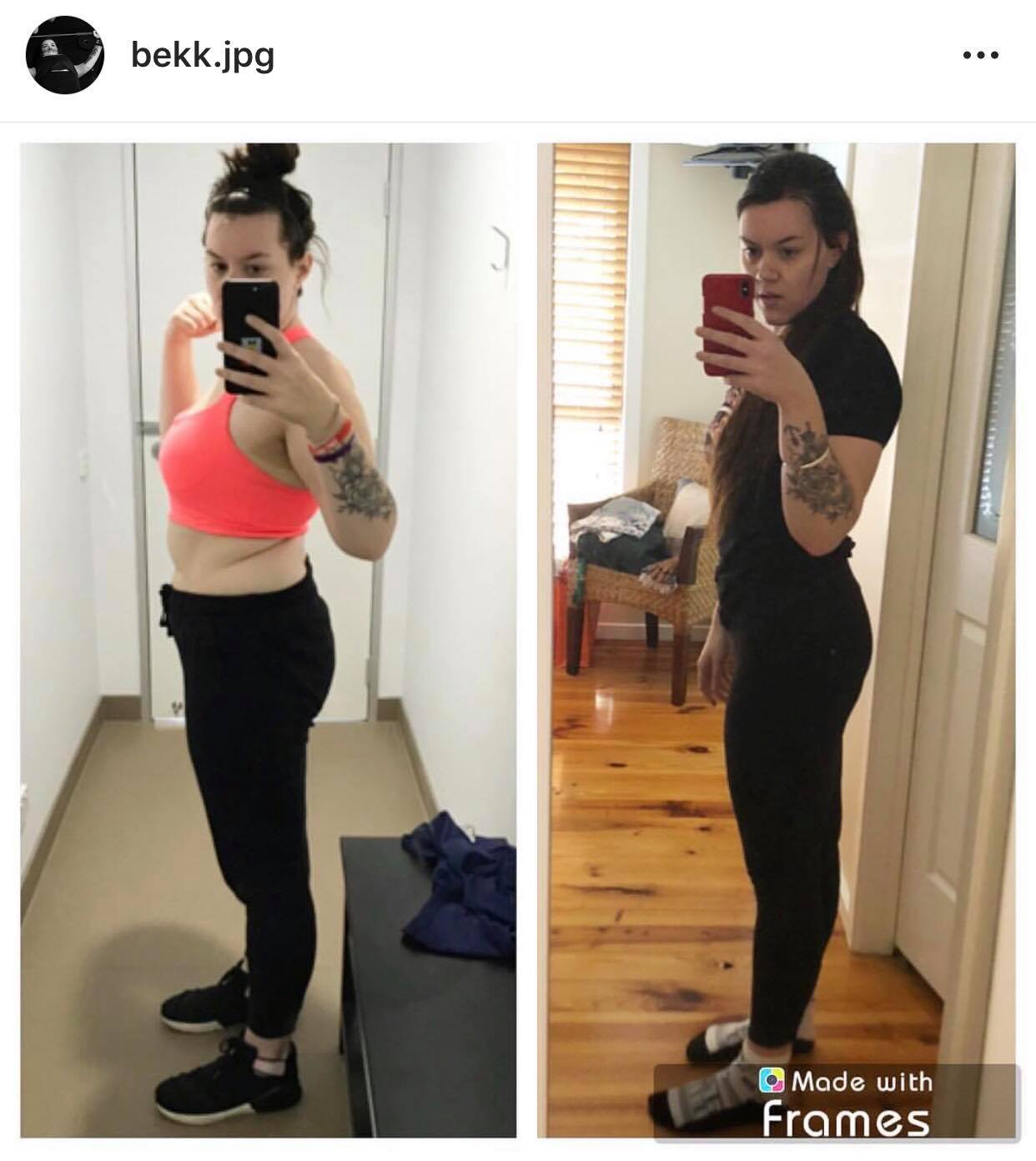 Let’s take a further look at the past 8 months with Bek and the things we have focussed on:

We got very specific with what we were chasing. We looked at what Bek was currently lifting and set parameters around what progression in her lifts looked like. Spoiler alert: it wasn’t all about how much weight was on the bar. Specifics such as to fix her uneven bar on her back in her squats. To unlock her arch in her bench press and learn to utilise her lats in the movement. To learn a new movement and transition from a conventional to a sumo deadlift.

We collected information day to day, week to week. What and why Bek was eating the foods she was eating. The more we talked about the feelings around her food choices, the better position we were in to identify what emotions kicked Bek’s goals to the curbs. What she grabbed when she was tired. What patterns emerged when she was feeling vulnerable. What habits were in place that were taking her away from her goals. From here we were able to develop strategies to address these patterns going forward.

Bek was in and out with training. Every week was hit & miss, one week she would kill it, another week she barely train. We opened into why this may be happening and made her training more realistic and achievable. We dropped the amount of days she was training and employed an approach that allowed her to hit the same training every week (3x strength sessions per week and 1x conditioning). We dropped the overall volume which meant that we could manage her fatigue.


Habitual change: we nourished her “why”

We addressed habits that had formed and how they related to her goals. By breaking further into what her goals really meant to her and why they were important, we began to see habitual changes occur naturally. The more we focussed on why she showed up to the barbell every week the more progress Bek made here.

Bek eats a vegan based diet. Bek was unsure of what food requirements her body may need to support her health and goals. By educating Bek on the importance of complete and incomplete protein sources she was then able to build a skill set to push her forward. By arming Bek with this information she was then able to incorporate foods that she loves and feels ethically passionate about whilst continuing to crush her goals.


Mindset: open into the hard stuff

We started to ask some tough and real questions. Some things that were most certainly confronting but necessary. How was her confidence holding her back? Why was she a self proclaimed “lazy eater”? What would it mean for her to actual compete?

Over the past 8 months, we have focussed on some really key elements as shown above. Training and nutrition were very much a smaller piece of the puzzle. The feelings behind the food, the consistency within her training all became a reality when we started to get real.

The progress Bek has made to date is just the start. With the attitude and passion Bek is nurturing, she will only continue to move forward.

We can’t wait to see Bek point that left toe as she gets under the barbell.